Encouraging Signs for Your Quest and Mine 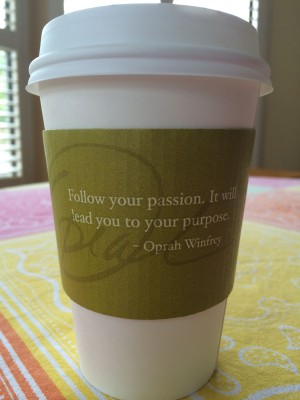 For a long time I have been avoiding writing publicly about the quest to write and publish my first book — The Possibility Book.

I haven’t posted much detail here within the Possibility Box, even though the box is supposed to be the platform for the book.

However silence and rejections from traditional publishers are leading me toward bringing The Possibility Book straight to you by sharing behind-the-scenes snippets here and publishing the story myself.

One Monday morning while driving to workout class, I quietly asked the Universe for encouragement.

A few moments later, a friend and fitness instructor, I’ll call her Sophie, breezed into the studio as a last-minute replacement for the regular teacher.

Sophie packed her music mix with Yes-Get-Your-Butt-Moving songs, including a version of “On a Mission” from Gabriella Cilmi. Happening to unexpectedly see my friend and hear those songs that morning… that was Encouraging Sign #1.

After class, another friend spontaneously invited me to Starbucks, where I spotted Encouraging Sign #2, this quotation on my cup of chai:

“Follow your passion. It will lead you to your purpose.” – Oprah Winfrey

The journey of writing The Possibility Book began with following my curiosity about and passion for inspirational quotations, and for more than two years I’ve been chronicling their appearances and roles in helping me to write the book.

Perhaps sharing what I was learning was part of my purpose. But what if sharing scared me? That would be a problem. 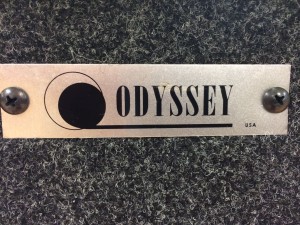 Right in front of my face during many workout classes, there had been a small “Odyssey” sign on the stereo stand near my usual spot. I didn’t remember seeing it until the previous Saturday, another morning when I was exercising while considering sharing my experiences more publicly and immediately with potential readers, which felt risky without the safety nets of editors and time.

Noticing this literal sign was like receiving a nod from the Universe acknowledging that “Yes, you are on an odyssey (emphasis on odd) and odysseys are not usually easy.” Encouraging Sign #3. 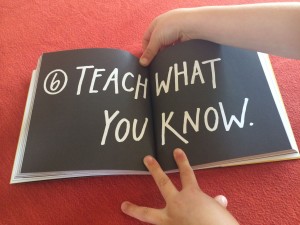 During that previous week, Maya Angelou had passed away and the blogosphere erupted into sharing some of her best quotes. The one that stuck with me most was, “When you learn, teach, when you get, give.”

Ms. Angelou died on a Wednesday. On Thursday, I read her quote about learning and teaching from two different sources — an Oprah and a writing newsletter. On Friday, Sophie came to my house for tea and brought a book to share: Show Your Work! 10 Ways to Share Your Creativity and Get Discovered by Austin Kleon. I read it cover-to-cover the next morning. One of his tips is “Teach What You Know,” which appeared in my life just two days after reading Ms. Angelou’s quote on the same topic. Ms. Angelou, Mr. Kleon and Sophie contributed Encouraging Signs #4 and #5.

The Universe seemed to be sending plenty of signs that it was time to share material instead of keeping it mostly to myself.

Apparently, I’m a little slow. It was taking a while for me to get the message.

How much more encouragement does one person need?! Evidently, lots, because I have amassed quite a collection of inspirational photos, products, books, songs, quotations and movie scenes with positive messages just waiting to be shared with you. 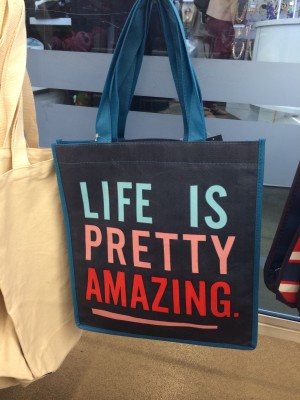 Writing about this here doesn’t come easily or naturally… it’s not the first or even the 21st thing that I want to do when I wake up in the morning.

But when I remember that I might have something meaningful and helpful to give you, that’s when I find the courage to step out of my comfort zone — writing without inhibition alone at my desk, on private pages that no one is going to read right away — and onto this platform, where the words are instantly available to everyone, including critics.

I’ve been writing within The Possibility Book about the positive messages appearing in my life because I believe that the stuff that has been popping up in my world during the process of writing and attempting to publish this book, encouraging me on my quest, could help encourage you to bring your best creative possibilities into reality too.

So next up, some positive messages that I’ve found recently in unexpected places:

On a bench at the Santa Cruz Beach Boardwalk

From an artist who shares my fascination with serendipity

Also I might dish some details about the rejections I’ve received from publishers.

Watch for them here or within Occasional Positive Message emails, where you can join me for this crazy escapade.

Let’s find out what can happen when someone follows the encouraging and inspirational signs.