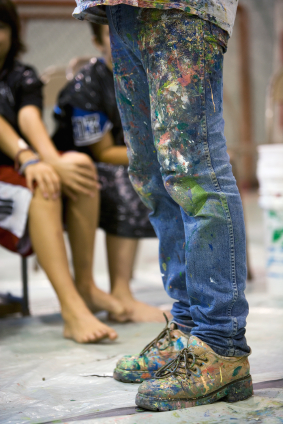 I love when life gives me moments that affirm I am on the right path. When the universe gives me a wink and a nod.

When I was a senior in high school, I was fortunate enough to be in the position of deciding between two great schools: Brown and Columbia. I had also gotten into Cal-Berkeley but wisely decided, with the strong encouragement of my parents, that it was too far away even though the pull of the west coast was very strong – and still is.

Both schools had pre-decision days for accepted students where you could stay over, meet students, attend class, and generally get a feel for the place. While at Brown, I met this guy with crazy paint splattered pants, long hair, and clear truthful eyes. We hit it off right away and spent the day tooling around campus, drinking copious amounts of coffee, and chatting. It turned out that he was from California, and told me that Brown was the “Berkeley of the east coast.”

The next day, I left for Columbia for the same kind of orientation. I walked into the welcome session, and lo and behold, my fancy pants buddy. It turned out he was making the same choice as I was. He seemed like just the kind of person I’d want to meet at college – smart, creative, and interesting.

Fast forward three months later, my parents and I packed up the car and were driving to Brown for freshman orientation. We stopped at a rest stop on the highway, and as I opened the sliding door of the minivan, someone was getting out of the car next to me. I couldn’t believe it – Mr. Fancypants. He was on his way to Brown too! I breathed a sigh of relief. The universe winked. I had made the right decision.

This wasn’t the last time that Fancypants marked my path. While we remained friendly at school, we didn’t run in the same circles and lost touch post-graduation, pre-Facebook. About seven or eight years after I graduated, I was at Kripalu, a spiritual retreat center, getting reconnected with myself but wondering whether Kripalu was right for me. One morning, I walked into breakfast and of course, he was the first person I saw. I knew I was in the perfect spot at the perfect moment.

There are so many other stories like this, and I’m sure you can think of a few from your own life:

I once was completely captivated by a guy I was interviewing for a job because he had just woken up one morning and decided to move to Costa Rica. I decided that meeting him meant that I needed to go to Costa Rica, so I did, and signed up for a random roommate at a yoga retreat. At the San Jose airport, I hit it off with a woman who was also heading to ten same retreat. By the time the van ride ended, we were fast friends. Of course, it also turned out she was my randomly assigned roommate. Eight years later, she’s a soul sister and dear friend.

My best friend in middle school lived at 507 S—– Street. It seemed like every time we looked at the clock, it was 5:07. It was our joke. And it still happens! And even today, years later and miles apart, when the clock reads 5:07, the universe winks and reminds me of her.

A few weeks ago, I ran into the wife of an old college friend at the train station. We followed up to make plans but didn’t confirm. On the day we had proposed to meet, I ran into her again so we confirmed in person!

Twice in the last year, my husband and I walked into a restaurant and were seated next to people we knew. Both times, it was people with whom we had unresolved business, and the sighting and conversation helped lead to closure.

When I pay attention, the universe always winks. It’s like these little inside jokes we have. Or it’s the universe giving me a little nudge or reminder about something. Whatever it is, it makes me smile and feel much less alone.

When did the universe last wink at you?

Read more at The Enliven Project