Message on My Doorstep 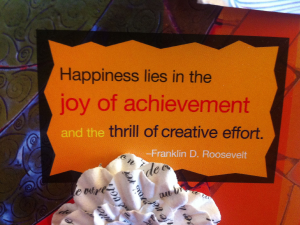 In early 2012, only a few people knew about The Possibility Book. The concept was just coming together. For a while, I kept the premise under wraps because I thought that if my friends knew what I was writing, they might prank me by putting positive messages all over the place. So I wrote The Possibility Book behind closed doors and kept the concept mostly to myself.

These were the days of occasional happy dances in my home office. Inspiration would strike at random times. While doing dishes. In the shower. In the middle of the night. I would run, actually sprint in my own home, to the computer, to capture thoughts before they were gone. The ideas seemed to be coming from somewhere other than me, and when I wrote down those words for the first time, it freaked me out, until I found out how many other writers have experienced something similar.

One day I remember feeling particularly enthralled with the words appearing on the page, and then Michael Buble’s Feeling Good played at random on Pandora.

During this same timeframe, out of the blue, our Realtor dropped off a gift bag and greeting card on our doorstep. The quotation on the card:

“Happiness lies in the joy of achievement and the thrill of creative effort.” – Franklin D. Roosevelt