It’s Not Just My Imagination 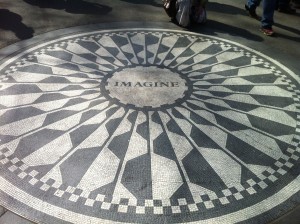 One day my 7-year-old asked me, “Mommy, what is your most favorite song ever?”

I thought for a moment and said, “If I had to pick just one, it might be ‘Imagine’ by John Lennon.”

A day or two later, I left California to attend the Writer’s Digest Conference in New York City and pitch literary agents on The Possibility Book, which chronicles the positive messages appearing and meaningful coincidences happening as I’m writing the book.

Before the conference began, I had one day to sightsee – my first time playing tourist in New York. A friend suggested starting in Central Park, just a few blocks from her apartment on the Upper West Side. Places like The Plaza Hotel, St. Patrick’s Cathedral and Times Square beckoned.

But the sight I stumbled upon first, was the Imagine memorial to John Lennon.

Every branch on every tree stood out in stillness. Music played in the distance. Winter white daylight breathed its last slight chill before spring. A small crowd lingered. The moment felt like living a high-definition movie. Because in the movies, things seem to magically present themselves at meaningful times, when the main characters need them.

Are you fully living the movie of your life, noticing and reveling in the remarkable connections? They might help you create something beautiful.