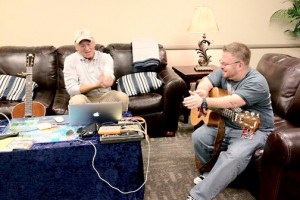 To celebrate 2013 and its new possibilities, I would like to propose a toast. Because there’s a Jimmy Buffett connection, the toast might be best with a margarita, Boat Drink or virgin tropical-juice blend in a big fishbowl glass:

“Who?,” I asked my husband a couple weeks ago when he first mentioned Matt.

Scott and I had been sitting by the Christmas tree, talking about possibilities for the New Year. I said something about people limiting what’s possible for themselves by limiting their thinking. As an example of what dreaming big can accomplish, he began telling me about Matt.

Matt Hoggatt is a singer-songwriter from Mississippi who went from semi-obscurity to celebrity during 2012 after he wrote a song called Dear Jimmy Buffett. His clever and catchy lyrics won a contest in American Songwriter, and the next thing Matt knew, he was on stage with Jimmy, performing his song. Jimmy even wrote and performed a song for him, Dear Matt Hoggatt. Then Matt later released Hotter Than Fishgrease on Mailboat Records.

I love this story because it shows how one minute you could be singing your song in a dive bar, and the next minute living one of your wildest dreams. The catalysts from one place to the next? Faith. Creativity. Action.

To me, Matt is like the poster guy for possibilities. I wanted to write about him. What the heck, I thought, I’ll send him an email and see what happens. It will probably go into the ether, and I’ll never hear back.

But Matt responded right away! So next up… a brief interview with some positive messages from him, and a fun coincidence story about the right song playing at the right moment.