Dealing with Negativity about Creativity 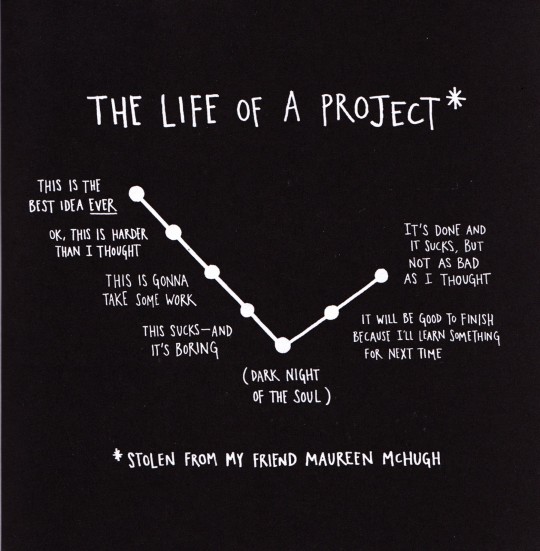 courtesy of Austin Kleon, from Steal Like An Artist

Recently during teatime with a friend, I was complaining about that tortuous phase of writing a book when boring qualities like self-discipline and determination come in handy.

She made me laugh out loud by describing “The Life of a Project” illustration above, spotted in Austin Kleon’s book Steal Like An Artist: 10 Things Nobody Told You About Being Creative.

What a relief to know we’re not alone with our occasional negativity about creativity!

On the positive side, I’m intrigued by Austin’s list of 10 things. (Reading it sparked the idea of writing 10 Things I Wish I Had Known Before This Month. Number One:  Never Ever Answer Your Phone in a Public Bathroom Stall. A story for another time, perhaps.) Also Austin’s dog video is cute and clever too. “You are a mash-up of what you let into your life,” he (Austin, not the dog) says.

What kinds of things are you letting into your life? You could counterbalance the negative news headlines by gathering more positive stuff and signing up for occasional Positive Message emails.